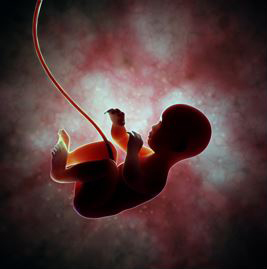 A treatment to move blood from the umbilical cord into an infant’s body may improve the overall health of newborns classified as non-vigorous—limp, pale and with minimal breathing, suggests a study funded by the National Institutes of Health. The procedure, known as umbilical cord milking, involves gently squeezing the cord between the thumb and forefinger and slowly pushing the blood into the abdomen. Compared to non-vigorous infants receiving the standard treatment of immediate umbilical cord clamping, infants who underwent cord milking were less likely to need heart and respiratory support, less likely to have a low level of oxygen in the brain, and more likely to have higher levels of hemoglobin, a substance indicating the presence of red blood cells.

The study was conducted by Anup C. Katheria, M.D., of Sharp Mary Birch Hospital for Women and Newborns in San Diego and colleagues at institutions in the United States, Canada and Poland. It appears in the American Journal of Obstetrics and Gynecology.

Standard practice for non-vigorous infants is to immediately clamp and cut the umbilical cord so that the infant can rapidly be resuscitated. Many researchers are concerned, however, that this could deprive them of needed blood and worsen their outcome. Non-vigorous infants are at risk for complications such as low oxygen levels in the brain, cerebral palsy and stroke. In the current study, authors sought to determine if cord milking for non-vigorous infants could provide similar benefits to delayed cord clamping in less time

Non-vigorous infants in the study were assigned at random to undergo either cord milking or immediate clamping. For the cord milking, attending providers milked 20 centimeters of cord for two seconds, then repeated this procedure three times. Of more than 16,000 infants born after 35 to 42 weeks of pregnancy and screened at 10 institutions, 1,730 were included in the analysis.

For the study’s primary outcome—admission to a newborn intensive care unit—the researchers found no significant difference between the two groups. However, the researchers found several significant differences between the two groups for the study’s secondary outcomes. On average, the cord milking group had a higher hemoglobin level than the immediate clamping group. Of the milking group, 61% required heart and respiratory support, compared to 71% for the clamping group. Moderate to severe hypoxic ischemic encephalopathy—low blood oxygen levels in the brain—occurred in 1.5% of the milking group, compared to 3% of the clamping group.