Early screening could allow for lifestyle changes before condition develops 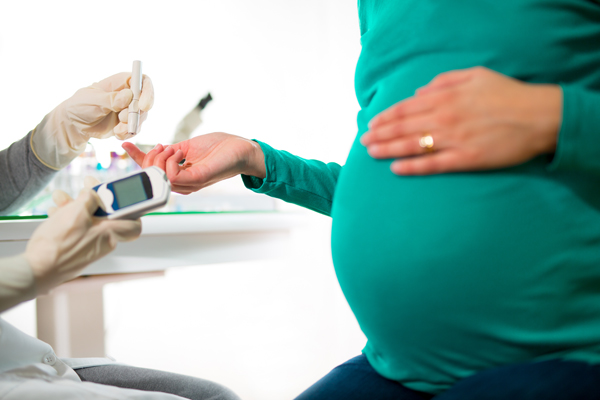 A blood test conducted as early as the 10th week of pregnancy may help identify women at risk for gestational diabetes, a pregnancy-related condition that poses potentially serious health risks for mothers and infants, according to researchers at the National Institutes of Health and other institutions. The study appears in Scientific Reports.

In the current study, researchers evaluated whether the HbA1c test (also called the A1C test), commonly used to diagnose type 2 diabetes, could identify signs of gestational diabetes in the first trimester of pregnancy. The test approximates the average blood glucose levels over the previous 2 or 3 months, based on the amount of glucose that has accumulated on the surface of red blood cells. According to the authors, comparatively few studies have examined whether the HbA1c test could help identify the risk for gestational diabetes, and these studies have been limited to women already at high risk for the condition. The test is not currently recommended to diagnose gestational diabetes at any point in pregnancy.

The researchers analyzed records from the NICHD Fetal Growth Study, a large observational study that recruited more than 2,000 low-risk pregnant women from 12 U.S. clinical sites between 2009 and 2013. The researchers compared HbA1c test results from 107 women who later developed gestational diabetes to test results from 214 women who did not develop the condition. Most of the women had tests at four intervals during pregnancy: early (weeks 8-13), middle (weeks 16-22 and 24-29) and late (weeks 34-37).

In middle pregnancy, HbA1c levels declined for both groups. However, HbA1c levels increased in the final third of pregnancy, which is consistent with the decrease in sensitivity to insulin that often occurs during this time period.

“Our results suggest that the HbA1C test potentially could help identify women at risk for gestational diabetes early in pregnancy, when lifestyle changes may be more effective in reducing their risk,” said the study’s senior author, Cuilin Zhang, Ph.D., of the Epidemiology Branch at NIH’s Eunice Kennedy Shriver National Institute of Child Health and Human Development.

Exercise and a healthy diet may lower blood glucose levels during pregnancy. If these measures are not successful, physicians may prescribe insulin to bring blood glucose under control.

Hinkle SN, et al. HbA1c measured in the first trimester of pregnancy and the association with gestational diabetes Scientific Reports, 2018.