Findings may inform strategies for breast feeding in modern populations 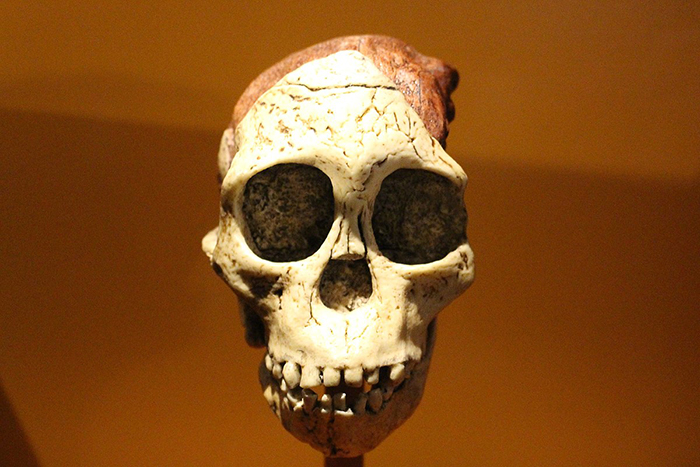 The skull of the Taung Child at the Natural History Museum in London, England.
Credit: Emöke Dénes, Wikimedia Commons

Infants of the extinct human species Australopithecus africanus  likely breast fed for up to a year after birth, similar to modern humans but of shorter duration than modern day great apes, according to an analysis of fossil teeth funded in part by the National Institutes of Health. The findings provide insight into how breast feeding evolved among humans and may inform strategies to improve modern breast-feeding practices. The study appears in Nature.

Like trees, teeth contain growth rings that can be counted to estimate age. Teeth rings also incorporate dietary minerals as they grow. Breast milk contains barium, which accumulates steadily in an infant’s teeth and then drops off after weaning. Study author Christine Austin, Ph.D., of the Icahn School of Medicine in New York, developed a method to analyze trace minerals in teeth with funding from NIH’s Eunice Kennedy Shriver National Institute of Child Health and Human Development (NICHD).

In the current study, researchers examined two sets of fossilized A. africanus teeth from the Sterkfontein Cave outside Johannesburg, South Africa. They found patterns of barium accumulation, suggesting that infants of this early human species likely breast fed for about a year—an interval which may have helped them overcome seasonal food shortages. A. africanus lived in southern Africa more than 2 million years ago. The species resided in savannahs with wet summers, when food was likely abundant, and dry winters, when food was scarce. Cyclical accumulations of lithium in the specimens’ teeth suggest the species endured food scarcity during the dry season, which may have contributed to its eventual extinction.

Industrialization and the introduction of infant formula changed breast-feeding practices. Analysis of the fossil record and remains from preindustrial societies can provide insight into the nature of those changes and their effects on infant development.

The NICHD grant to Dr. Austin funded a project to identify biomarkers identifying the transition from breast feeding to formula feeding. Among other projects, the method she developed has been used to identify changes in zinc and copper metabolism preceding autism symptoms in young children and linking exposure to manganese in the womb with larger birth size.

Funding to develop research infrastructure and other research techniques for the study was provided by NIH’s National Institute of Environmental Health Sciences.

Daniel J. Raiten, Ph.D., of the NICHD Pediatric Growth and Nutrition Branch, is available for comment.