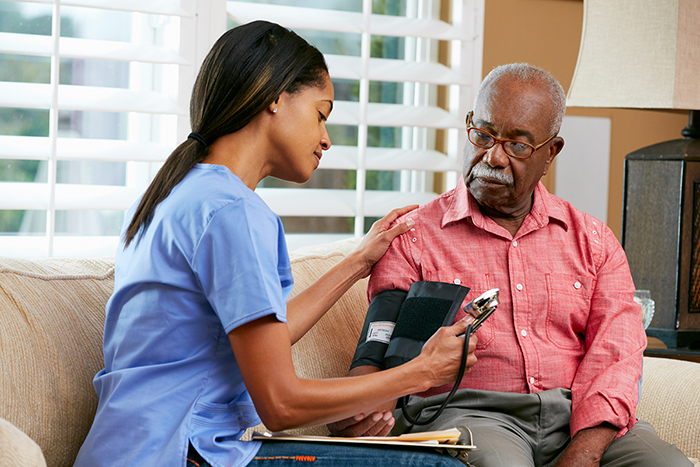 Variants in the gene ARMC5 may be associated with high blood pressure among blacks, according to a National Institutes of Health study led by researchers at the Eunice Kennedy Shriver National Institute of Child Health and Human Development (NICHD). The study team identified 17 variants in the ARMC5 gene that were associated with high blood pressure by analyzing genetic research databases that include those of African descent. The study is published in the July 3, 2019, issue of the Journal of the American Heart Association.

“High blood pressure increases a person’s risk for heart disease and stroke,” said Constantine A. Stratakis, M.D., D. Sc., NICHD Scientific Director and the study’s senior author. “The condition is more common among blacks, who also tend to get it at a younger age than whites do, and we are studying the underlying causes of this health disparity.”

Earlier work by the NICHD group linked some variants of ARMC5 to primary aldosteronism, a hormonal disorder that causes high blood pressure, among black patients. In the current study, the researchers analyzed datasets containing genetic information from large numbers of people, including NIH’s Minority Health Genomics and Translational Research Bio-Repository Database  and the Genomics, Environmental Factors and Social Determinants of Cardiovascular Disease in African-Americans Study, which are based in the United States, as well as the UK Biobank .

The researchers identified 17 variants of ARMC5 that were associated with blood pressure among blacks. One variant, called rs116201073, was “protective” and associated with lower blood pressure. It was more common than the others, and it appeared limited to people of African descent, as it is found only in Africans in the international 1000 Genomes Project.

The researchers also reconstructed the rs116201073 variant in cell lines and found that it was more active than other variants of the ARMC5 gene. However, the exact function of the ARMC5 gene is unclear, and more work is needed to understand what the gene does and how variants may protect or predispose a person to high blood pressure.

NHGRI is one of the 27 institutes and centers at the NIH, an agency of the Department of Health and Human Services. The NHGRI Division of Intramural Research develops and implements technology to understand, diagnose and treat genomic and genetic diseases. Additional information about NHGRI can be found at: www.genome.gov.