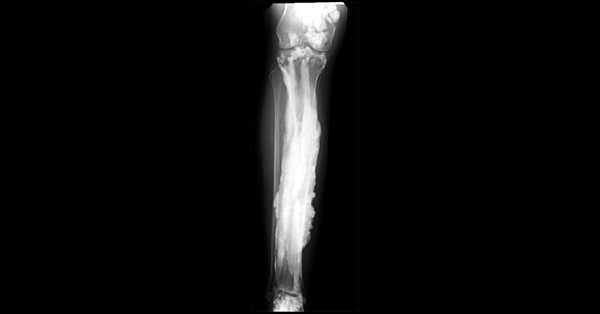 Researchers at the National Institutes of Health worked with 15 patients from around the world to uncover a genetic basis of “dripping candle wax” bone disease. The rare disorder, known as melorheostosis, causes excess bone formation that resembles dripping candle wax on x-rays. The results, appearing in Nature Communications, offer potential treatment targets for this rare disease, provide important clues about bone development, and may lead to insights about fracture healing and osteoporosis.

Though there are only about 400 known cases of this disorder worldwide, 15 unrelated adults with the condition from around the globe volunteered to come to the NIH Clinical Center to undergo biopsies of both affected and unaffected bones. The condition causes pain and bone deformity, which can limit the function of bones.

“Scientists previously assumed that the genetic mutations responsible for melorheostosis occurred in all cells of a person with the disorder,” said co-senior author Timothy Bhattacharyya, M.D., head of the Clinical and Investigative Orthopaedics Surgery Unit at the National Institute on Arthritis and Musculoskeletal and Skin Diseases (NIAMS) at NIH. “Our team hypothesized that mutations might only occur in the affected bone tissue.”

Researchers compared samples of healthy and affected bone from each participant to look for differences in the exome, the portion of the genome that codes for proteins.  Comparing genetic information from both samples in each patient allowed the team to pinpoint even low levels of the mutations. Experts from NIAMS and the Eunice Kennedy Shriver National Institute of Child Health and Human Development (NICHD) worked together on this study.

The analysis revealed that 8 of the 15 participants had mutations in the MAP2K1 gene in the affected bone only. MAP2K1 produces the protein MEK1. The gene MAP2K1 has previously been linked to some types of cancerous growths as well as to conditions that lead to abnormal blood vessel formation in the head, face or neck.

In melorheostosis, all the identified MAP2K1 mutations affect a region of the MEK1 protein that normally suppresses its activity, thus they cause MEK1 to become overactive. The bone growth is considered benign and does not spread to other parts of the body.

“This is an exciting study of a very rare bone disorder that not only identified the responsible mutation in half of the patients, but uncovered fundamental information about the role of a cancer-related gene in the metabolic pathways of normal bone,” said study co-senior author Joan Marini, Ph.D., M.D., of NICHD. “When we started, we had no preconceived causative pathways, but the participation of the patients has really changed the scientific landscape on this topic. Further studies on how this pathway works in both normal and mutant bone cells may have broad implications that could benefit a wider population.”

“Most adults have the problem of weakening bones as they grow older. These patients have the opposite problem as some of their bones are rock hard and still growing,” said Bhattacharyya. “The prospect that we could somehow harness this pathway in the future is so exciting.”

The study was supported by the NIH Intramural Research Program (ZIDAR041180 and Z1AHD000408) and the Melorheostosis Association. The Ludwig Boltzmann Institute of Osteology in Austria worked with the NIH on this study.

The study is registered at ClinicalTrials.gov as NCT02504879.

The mission of the NIAMS, a part of the U.S. Department of Health and Human Services' National Institutes of Health (NIH), is to support research into the causes, treatment, and prevention of arthritis and musculoskeletal and skin diseases; the training of basic and clinical scientists to carry out this research; and the dissemination of information on research progress in these diseases. For more information about the NIAMS, call the information clearinghouse at (301) 495-4484 or (877) 22-NIAMS (free call) or visit the NIAMS website at www.niams.nih.gov.