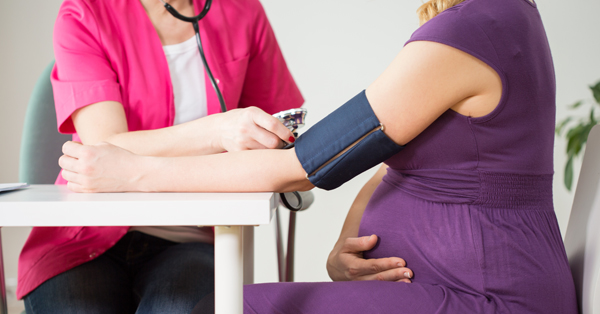 Elevated blood pressure before conception may increase the chances for pregnancy loss, according to an analysis by researchers at the National Institutes of Health. The authors conclude that lifestyle changes to keep blood pressure under control could potentially reduce the risk of loss. The study appears in Hypertension.

The analysis found that for every 10 mmHg increase in diastolic blood pressure (pressure when the heart is resting between beats), there was an 18-percent-higher risk for pregnancy loss among the study population. Millimeter of mercury, or mmHg, is the unit of measure used for blood pressure. The researchers also found a 17 percent increase in pregnancy loss for every 10 mmHg increase in mean arterial pressure, a measure of the average pressure in the arteries during full heart beat cycles. The study was conducted by researchers at the Eunice Kennedy Shriver National Institute of Child Health and Human Development (NICHD).

“Elevated blood pressure is linked to heart disease, stroke, and kidney disease” said the study’s senior author, Enrique Schisterman, Ph.D., chief of the Epidemiology Branch at NICHD. “Our findings suggest that attaining a healthy blood pressure before pregnancy could not only have benefits later in life, but also reduce the chances for pregnancy loss.”

NICHD researchers analyzed data collected as part of the Effects of Aspirin in Gestation and Reproduction (EAGeR) trial, which sought to determine if daily low-dose aspirin (81 milligrams) could prevent miscarriage in women who had a history of pregnancy loss.

The researchers note that the study does not prove that elevated blood pressure causes pregnancy loss. It is possible that another, yet-to-be identified factor could account for the findings. They added, however, that the relationship between pre-pregnancy blood pressure and pregnancy loss remained the same when they statistically accounted for other factors that could increase pregnancy loss, such as increasing maternal age, higher body mass index or smoking.