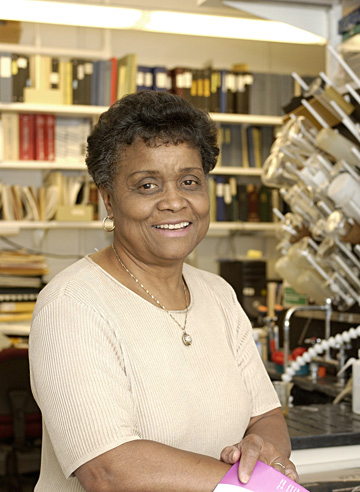 Longtime NIH investigator Ida Stephens Owens, Ph.D., died February 24 at the age of 80. Dr. Owens was the first African American woman to earn a doctoral degree from Duke University in 1967 and was internationally known for her contributions to the understanding of the genetics of drug metabolism.

Born in 1939 in Whiteville, North Carolina, Dr. Owens earned her Bachelor of Science degree in biology from North Carolina College, now North Carolina Central University, in 1961. She began her Ph.D. studies in biochemistry and physiology a year later. At the time, Duke University had just started racially integrating its graduate and professional schools. She was among the first three African American graduate students to enroll.

After earning her Ph.D., Dr. Owens came to NIH in 1968 as a fellow in the Laboratory of Biochemistry and Metabolism in what was then the National Institute of Arthritis, Metabolic, and Digestive Diseases. She then joined NICHD for a second fellowship in the Section on Developmental Pharmacology in the Laboratory of Biomedical Sciences. In 1975, Dr. Owens started her own laboratory at NICHD, the Section on Drug Biotransformation, later renamed the Section on Genetic Disorders of Drug Metabolism. She retired from NIH in 2017.

In her nearly five decades at NIH, Dr. Owens made several major advances in the study of a critical group of enzymes called UDP-glucuronosyltransferases (UGTs), which are responsible for detoxifying numerous drugs, toxic chemicals, and other substances. She designed methods to study genes that code for specific UGTs, allowing her to characterize UGT1A1, the gene for an enzyme that processes the protein bilirubin, a breakdown product of hemoglobin. She also identified 12 previously unknown and independent UGT enzymes. Dr. Owens identified a genetic defect in the gene UGT1A1 that leads to Crigler-Najjar syndrome, a disorder that disrupts normal processing and excretion of bilirubin, leading to jaundice. She also found that UGT enzymes must be activated before they can detoxify foreign chemicals and that, in some cases, suppressing these enzymes could enhance the effects of therapeutic drugs.