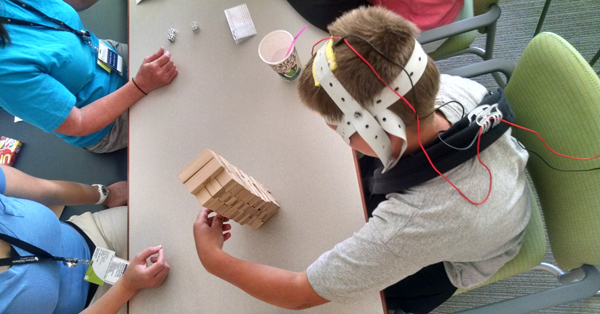 Using a mild electrical current to either boost or inhibit the brain’s own electrical impulses may one day help rehabilitate its function, according to researchers funded by the Eunice Kennedy Shriver National Institute of Child Health and Human Development, part of the National Institutes of Health.

In a preliminary study of 20 children and youth with cerebral palsy, the researchers found that applying an electrical current to the part of the brain unaffected by the condition resulted in a small, but significant increase in hand function for those retaining neural connections between the injured and non-injured sides of the brain.

The researchers say that the results, although demonstrating only a modest improvement for some individuals, may soon allow researchers to distinguish those who could benefit from the treatment from those who won’t. The researchers add that the results show that at the low level of stimulation they studied, the technique was safe in children with brain injuries and resultant cerebral palsy.  The finding provides the basis for additional research in a larger group of individuals and to study other intensity levels of electrical stimulation.

The study was conducted by Bernadette Gillick, Ph.D., and colleagues at the University of Minnesota/Gillette Children’s Specialty Healthcare. It appears in the European Journal of Paediatric Neurology.

Cerebral palsy is a group of neurological disorders appearing in infancy or early childhood that permanently affect movement and muscle coordination. The condition is caused by a stroke or other damage, which lead to disruptions to areas of the brain controlling movement, posture, and balance.

The researchers evaluated the effectiveness of a form of stimulation known as transcranial direct current stimulation (tDCS), which involves passing an electrical current through the skull and into the brain. Depending on the placement of the electrodes used to deliver the current and the strength of the current, the technique can either excite certain parts of the brain or inhibit them. For the study, the current was provided by 2 9-volt batteries.

The researchers enrolled 20 young people (ages 7-21 years) in the study. Around or before birth, all had experienced a stroke on one side of the brain, or bleeding inside the fluid-filled cavities inside the brain (periventricular leukomalacia). The brain injury affected mainly one upper limb while leaving the other limb less-affected. All participants underwent 10 tDCS sessions for 20 minutes, combined with two hours of CIMT and exercises for the more-affected hand.
Half the participants were assigned at random to receive tDCS while the other half served as a control group, wearing the head gear for the tDCS therapy while receiving no current. The current was directed to the primary motor cortex (an area of the brain that contributes to movement) in the uninjured side of the brain. Dr. Gillick explained that the current inhibited the impulses in this part of the motor cortex, in hopes that the part of the motor cortex in the injured part of the brain would become more active and exert more control over the more-affected limb.

All participants showed some improvement in hand function when the study period ended.  Overall, the researchers found that there were no significant differences between those who had received the current and those in the control group. The researchers then examined the differences between those participants who had strong connections between each side of their brain and their hand function, and those whose connections appeared to be altered or disrupted due to the brain injury.  Those who retained some connections between the two sides of the brain showed greater improvements in hand function over those whose connections were altered, although the sample size was not large enough to produce statistically significant results.

Dr. Gillick explained that the effort demonstrated that such a study was feasible, with no serious adverse effects appearing during the study or after 6 months of follow-up. Moreover, evidence of effectiveness in the group retaining connections from both sides of the brain suggests that it may be possible to target future therapies to those likely to benefit, while sparing those unlikely to benefit.

The researchers plan to continue their work with a larger number of participants, researching how best to modify the intervention to produce benefits. In addition to addressing the overly inhibitory brain activity, the electrical current might also be used to stimulate certain brain areas on the same side as the injury, which may help children gain greater control of more-affected limbs.