Findings may yield insight into development of newborn heart malformations, other birth defects 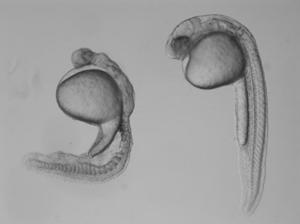 A molecule containing genetic instructions passed on from the mother to the egg must be present for the fertilized egg to survive and develop into a normal embryo, according to results of a zebrafish study funded by the Eunice Kennedy Shriver National Institute of Child Health and Human Development, part of the National Institutes of Health. The study appears in a recent issue of eLifeand was conducted by researchers from Princeton University.

The researchers found that if zebrafish eggs are deprived of a specific messenger RNA molecule passed on from the mother, they will develop abnormally after fertilization and soon die. The RNA molecule contains the instructions to make a protein known as growth differentiation factor-3 (GDF3). Although they can make GDF3 on their own, fertilized zebrafish eggs deprived of the messenger RNA molecule from their mothers cannot produce two of the three major cell types the embryo needs to develop.

The findings provide insight into the early stages of embryonic development and could ultimately yield information for understanding and treating a class of birth defects relating to left-right development in the embryo, including heart malformations present at birth.

DNA contains the information for making proteins used by cells. Messenger RNA is a molecule that carries the instructions from a length of DNA out of the nucleus and into the cell, where it is translated into a protein. Previous studies have shown that messenger RNA needed to make GDF3 are deposited in the cytoplasm—fluid surrounding the nucleus—in the egg cell.

A wealth of papers have been written on how this RNA is localized and regulated, but it was never clear what its protein actually does in the developing embryo, said the study’s senior author Rebecca Burdine, Ph.D., associate professor of molecular biology at Princeton University.

Researchers developed zebrafish embryos lacking the gene for GDF3. These embryos developed normally and grew into adults. However, the adult females could not provide GDF3 messenger RNA to their own eggs, and their embryos failed to develop and soon died. Deprived of maternal GDF3 messenger RNA, the embryos could not produce cells for two embryonic structures essential for further development: the mesoderm and the endoderm.

However, if fertilized eggs from these adult females received injections of maternal GDF3 RNA, the resulting embryos would continue to develop. When the researchers provided the embryos with just enough GDF3 protein to develop the mesoderm and endoderm before eliminating their supply of the protein, the embryos developed abnormal Kupffer’s vesicles—the cell structure that establishes the differences between the left and right sides of the body. These embryos later developed hearts that were abnormally positioned.

The study provides basic information on the development of the early embryo, which could lead to insights on the genetic factors underlying newborn heart malformations and other birth defects involving the left-right positioning of the internal organs.