Down Syndrome: Other FAQs

Basic information for topics, such as “What is it?” and “How many people are affected?” is available in the Condition Information section. Frequently Asked Questions (FAQs) that are specific to a certain topic are answered in this section.

Is there a cure for Down syndrome?

Currently, there is no cure for Down syndrome. However, researchers are exploring a number of ways to address and correct many aspects of the syndrome.

Learn more about NICHD research on Down syndrome.

How can parents and providers help teens and young adults with Down syndrome transition into adulthood? 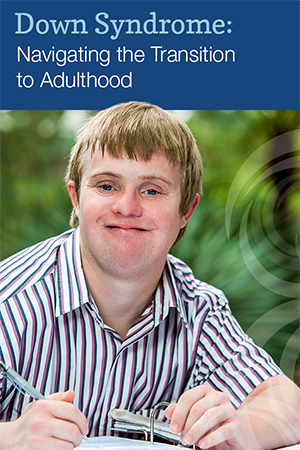 More and more youth and young adults with Down syndrome are achieving some of the same milestones as other young people, such as driving a car and finishing high school. As they start to live more independently, young people with Down syndrome get jobs, move into group homes or individual housing, or pursue further education, often at community colleges. Families may need to be advocates to ensure that their young adult children don’t “fall through the cracks.” Sometimes, young people with Down syndrome in the midst of these transitions start to do worse in school or undergo major mood changes. In these cases, additional school assistance or evaluation for hypothyroidism or depression may be appropriate.

Many adolescents and adults with Down syndrome find success in jobs. The Americans with Disabilities Act (ADA) makes it illegal for an employer of more than 15 individuals to discriminate against people with disabilities who are qualified to carry out a particular job, and the law requires employers to provide reasonable accommodation. When considering whether their older child with Down syndrome might be ready to look for work, parents should keep several factors in mind: Success depends on a healthy sense of self-esteem, the ability to complete tasks without help, a willingness to separate emotionally from family, and access to personal recreational activities.3 Assistive electronic devices can help, too.

What are the health issues for adults with Down syndrome?

Increased life expectancy in individuals with Down syndrome puts them at risk as they age for developing mental health issues, such as depression. Death of parents, changes in caregivers, and medical issues often contribute to such changes in mental health. Individuals with Down syndrome seem to respond well to treatment with medication, but it is important that they follow instructions for taking these medications closely.6

Premature aging is a characteristic of adults with Down syndrome, as is dementia, memory loss, and impaired judgment similar to that occurring in individuals with Alzheimer disease.6 Although much has been learned about Alzheimer disease as it affects individuals with Down syndrome, effective treatments and diagnostic tools that can identify early stages of dementia or the symptoms of mild cognitive impairment are still needed. Currently, changes in behavior may be the best indicators of dementia in people with Down syndrome. Families should look for associations between the type of behavior, how often the behavior occurs, when the behavior occurs, and the persistence of specific behaviors as a way to check for dementia and memory loss in a person with Down syndrome.6,7 Family members and caretakers may need to step in if the individual begins to lose the skills required for independent living.

Other medical issues associated with aging in individuals with Down syndrome include high cholesterol (which can be treated with medications), obesity, metabolic syndrome, diabetes, cataracts and other visual problems, and early menopause. In contrast, individuals with Down syndrome appear to be "protected" from certain diseases that are common in the elderly: they do not develop hardening of the arteries; they have fewer solid tumor cancers (for example, breast cancer), and they have low blood pressure.8,9,10,11

Longitudinal studies of aging in Down syndrome (some ongoing for more than 25 years) reveal that healthy aging occurs in most individuals with Down syndrome if they continue to receive routine medical care and attention to their special needs.

Open Citations
« What conditions or disorders are commonly associated with it?