Biosketch of the NICHD Director 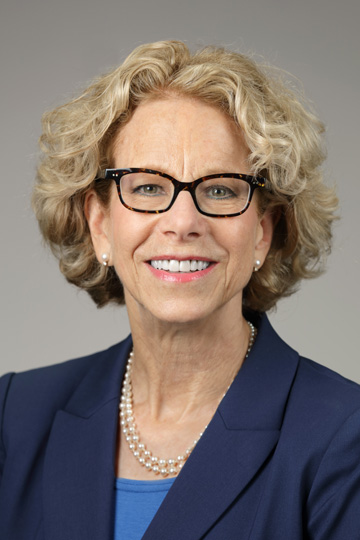 Diana W. Bianchi is the Director of the Eunice Kennedy Shriver National Institute of Child Health and Human Development. In this role, she oversees the institute's research on pediatric health and development, maternal health, reproductive health, intellectual and developmental disabilities, and rehabilitation medicine, among other areas. These efforts include managing a staff of approximately 1,400 people and an annual budget of approximately $1.5 billion.

Dr. Bianchi has had a busy tenure since joining NICHD in 2016. She spearheaded efforts on the NICHD Strategic Plan, released in September 2019, which outlines goals and aspirations to guide institute research for the next five years. She also oversaw the crafting and vetting of the institute’s new vision statement—Healthy Pregnancies. Healthy Children. Healthy and Optimal Lives—as well as its new mission statement. The latter, generated alongside the strategic plan, underscores NICHD’s directive since its founding—to lead research and training to understand human development—and incorporates goals for all facets of NICHD—to improve reproductive health, enhance the lives of children and adolescents, and optimize abilities for all.

Dr. Bianchi received her B.A. magna cum laude from the University of Pennsylvania and her M.D. from Stanford University School of Medicine. She completed her residency training in Pediatrics at the Children’s Hospital, Boston and her postdoctoral fellowship training in both Medical Genetics and Neonatal-Perinatal Medicine at Harvard. She is board certified in all three specialties and is a practicing medical geneticist with special expertise in reproductive genetics and genomics. Dr. Bianchi’s translational research focuses on two broad themes: prenatal genomics with the goal of advancing noninvasive prenatal DNA screening and diagnosis, and investigating the fetal transcriptome to develop new therapies for genetic disorders that can be given prenatally.

Dr. Bianchi has published more than 300 peer-reviewed articles, and she is one of four authors of Fetology: Diagnosis and Management of the Fetal Patient. This book won the Association of American Publishers award for best textbook in clinical medicine in 2000. The second edition was published in April 2010 and is in its third printing. It has been translated into Japanese, Mandarin, and Spanish.

Dr. Bianchi is widely recognized for her achievements. Prior to coming to NICHD, she spent 23 years at Tufts Medical Center, where she was the founding Executive Director of the Mother Infant Research Institute, as well as the Natalie V. Zucker Professor of Pediatrics, Obstetrics, and Gynecology at Tufts University School of Medicine. Dr. Bianchi also was the Vice Chair for Pediatric Research at the Floating Hospital for Children, Boston, and served for a time on the NICHD advisory council. She is currently Editor-in-Chief of the international journal Prenatal Diagnosis and is a Past President of the International Society for Prenatal Diagnosis and the Perinatal Research Society. She is a former member of the Board of Directors of the American Society for Human Genetics and a former council member of both the Society for Pediatric Research and the American Pediatric Society. She was elected to membership in the National Academy of Medicine (formerly the Institute of Medicine) in 2013.

Dr. Bianchi has received several major lifetime achievement awards. In 2020, she received an honorary doctorate from the University of Amsterdam that recognized her contributions to the fields of fetal cell microchimerism and noninvasive prenatal testing using DNA sequencing of fetal and placental DNA fragments. The Pioneer Award was given in 2019 by the International Society for Prenatal Diagnosis to acknowledge her transformative contributions to the practice, science, and profession of prenatal diagnosis and therapy. The Colonel Harland D. Sanders Lifetime Achievement Award in Genetics, given to Dr. Bianchi in 2017 by the March of Dimes, recognized her pioneering work on maternal and fetal cellular communication, including its significance in disease and diagnostics, and for exploring treatments of fetal disorders. The 2017 J.E. Wallace Sterling Lifetime Achievement Award in Medicine recognized her achievements as an alumna of the Stanford University School of Medicine. The Maureen Andrew Award for Mentoring, given in 2016 by the Society for Pediatric Research, recognized her commitment to mentoring the next generation of clinician-scientists. The Landmark Award, from the American Academy of Pediatrics, was given in 2015 in recognition of her research and contributions to genetics and newborn care.