For most of my life, I've led an urban existence. Growing up in Manhattan and working for over 30 years in Boston, I rarely encountered wildlife, other than pigeons and squirrels. One evening, however, shortly after I arrived at NIH last fall, I was shocked to come face to face with a large buck as I headed toward my car. In subsequent conversations with colleagues, I learned that deer roam freely on the NIH campus. This was especially surprising because NIH isn't in the countryside, it's in a heavily populated suburb just outside of Washington, DC. This wildlife encounter startled me at first, but then I thought about how interactions with animals, particularly in the fast pace of modern life, help to calm us and give us perspective. 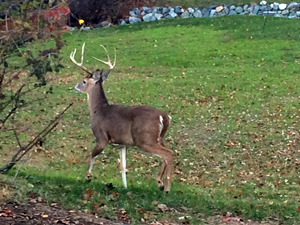 Indeed, companion animals—the dogs, cats, birds, and other pets that share our homes and our lives—significantly affect our health and well-being. In fact, an important part of NICHD's research portfolio is the study of how these human-animal interactions influence child health and behavior, and impact our overall quality of life.

For the past 10 years, NICHD's Child Development and Behavior Branch has had a partnership with the WALTHAM® Centre

for Pet Nutrition, a division of Mars, Inc., to research the impact of animal interactions on child health and development. This partnership has led to several published works describing the therapeutic benefits of our companion animals.

In a 2015 NICHD-funded study, a group of adolescents with type 1 diabetes each cared for a pet fish twice a day by feeding and checking water levels. The routine also included changing tank water each week, coupled with the children reviewing their glucose logs with parents. The researchers found that, when compared to teens who hadn't been given a fish to care for, the fishkeeping teens were more disciplined about checking their own blood glucose levels, which is essential for maintaining their health. Kids ages 10 to 13 years showed the greatest increase in self-monitoring following the pet fish intervention. 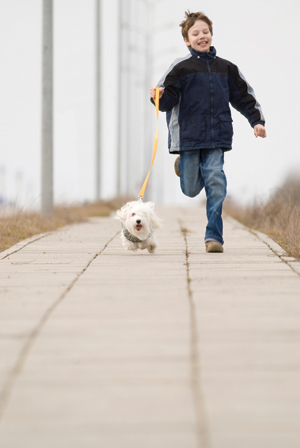 That same year, another study found that children with autism spectrum disorder were calmer while playing with guinea pigs. Researchers gave each child a wristband that measured skin conductance—a measure for excitement and anxiety. A device inside the wristband sends an imperceptible electric current through the skin. The more anxious a person feels, the faster the current will travel through the skin. When the children with autism spent 10 minutes in a supervised group playtime with guinea pigs, their anxiety levels dropped. The children with autism also showed improved social functioning and were more engaged with their peers—an important benefit for children with autism.  The researchers speculated that, because the animals offered unqualified acceptance, their presence comforted and calmed the children.

Finally, dogs may prove to be an important addition to help kids cope with attention-deficit-hyperactivity disorder (ADHD). Another NICHD study enrolled two groups of children diagnosed with ADHD into a 12-week group therapy session.One group of kids read to a therapy dog once a week for 30 minutes, while the other group read to puppets that looked like dogs. Both groups showed improvements from the therapy sessions. However, the kids who read to the real animals performed better in measures of social skills, prosocial behaviors (such as sharing, cooperation, and volunteering), and behavioral problems. The researchers theorized that these interactions with dogs may help children focus their attention, thus improving their executive-functioning skills.

As a scientist and a mother who has raised kids, fish, and cats, I understand and appreciate the importance that our furry and scaly friends have in our daily lives. NICHD continues to support research that examines the potential benefits of animals on our health and on the effectiveness of animal-assisted therapies in alleviating the symptoms of certain disorders and conditions, particularly in children. I have now grown accustomed to seeing the deer stroll undeterred around our bucolic campus, and I am even beginning to recognize some of the females by their numbered ear tags. On evenings when I am working late, I am grateful for a few moments of what I call the "NIH Safari," the view of a herd of deer eating grass and gracefully making their way down into the parking lot in front of our office building.