Learn why a pregnancy is now considered "full term" at 39 weeks.​

replaced the use of "term" birth (gestation between 37 weeks and 42 weeks) with the following gestational age designations: 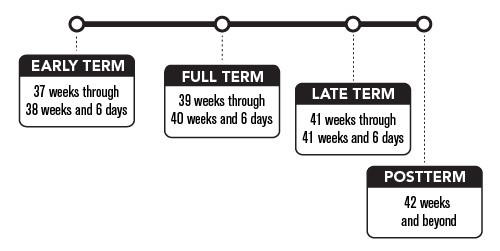 Why did the designations change?

These terms offer more specificity to accurately convey the distinction of health benefits and risks for each week of gestation from 37 weeks to 42 weeks.

In the past, this entire period was considered "term," implying that neonatal outcomes from deliveries at any point in this interval were uniform.

We now have strong evidence from research, conducted in part by the NICHD, that the risk for adverse outcomes is greater for neonates delivered in the newly created early-term period compared with those delivered after 39 weeks.1,2

The terminology change communicates the results of this research to both health care providers and patients.3

What are the risks associated with early-term deliveries?

In a healthy pregnancy, outcomes for both the infant and mother are best if the infant stays in the womb for at least 39 weeks.

Clinical evidence shows that a fetus goes through a significant amount of development and growth in the lungs, liver, and brain between 37 weeks and 39 weeks of gestation. An infant born prior to 39 weeks faces a 20% greater risk of significant medical consequences than those born after 39 weeks. Mortality rates are also higher among infants delivered in the early-term period compared with those born after 39 weeks, now called full-term births.4

It also is important to note that pregnancies thought to be 37 weeks may actually be misdated and at an earlier stage of gestation. Delivery at that time, therefore, would come with increased risk for health problems.

What do the new designations mean for my practice?

Management of pregnancies should be guided by the data for these gestational-age specific terms and by the health of the mother and fetus.5 If the pregnancy is healthy, it's best to wait until at least 39 weeks of gestation to deliver. Waiting until 39 weeks gives the infant the best possible chance for a healthy start in life.

Planned deliveries before 39 weeks should occur only when continuing the pregnancy poses significant health risks to the mother and/or the fetus.

Where can I learn more?

to learn more about these designations.

Depression and anxiety can happen during pregnancy or after birth. Learn the signs a​nd how to ge​t​ help.​​​​

Learn why allowing baby to​ ​remain in the​​ womb until at least 39 weeks, if possible, is safest for both baby and mother.