Regulation of Gene Expression at the Beginning of Mammalian Development

Mammalian development begins when an egg is fertilized by a sperm. Fertilization activates the first of six to seven cell cleavage cycles over a four day period that culminate in formation of a blastocyst containing 64 to 128 cells comprising two cell types (Fig. 1). The outer layer of cells comprises the trophectoderm that will form the placenta, while the inner cell mass consists of about 25 totipotent embryonic stem cells that will produce the embryo. The first round of DNA replication occurs in both the maternal and paternal pronucleus of the fertilized egg (1-cell embryo). About 4 hours later, the first mitosis occurs to produce a 2-cell embryo in which each "zygotic nucleus" contains a complete set of parental chromosomes. This cleavage event is rapidly followed by the second S-phase and expression of a small number of zygotic genes (~38 to 282). Changes in the totipotency of individual cells are first detected at the 8-cell stage, although clearly differentiated cells first appear at the blastocyst stage with formation of embryonic (inner cell mass) and extraembryonic (trophectoderm) lineages (reviewed in Nothias et al., 1995; Nothias et al., 1996; Majumder & DePamphilis, 1995; Schultz et al., 1999; DePamphilis, Kaneko & Vassilev, 2002).

A growing mouse oocyte, arrested at diplotene of its first meiotic prophase, transcribes and translates many of its own genes, thereby producing a store of proteins sufficient to support development to the 8-cell stage. When an oocyte matures into an egg, it arrests in metaphase of its second meiotic division where transcription stops and translation of mRNA is reduced (Fig. 1). Fertilization triggers completion of meiosis and formation of a 1-cell embryo containing a haploid paternal pronucleus derived from the sperm and a haploid maternal pronucleus derived from the oocyte. DNA replication begins after formation of the pronuclear envelopes, and occurs in each pronucleus from 10 - 16 hours post-fertilization (hpf). The first mitosis occurs from 17 ­ 20 hpf to produce a 2-cell embryo containing two diploid "zygotic" nuclei, each with a set of paternal and a set of maternal chromosomes. Formation of a mouse 2-cell embryo marks the transition from maternal to zygotic gene dependence. Degradation of maternal mRNA is triggered by meiotic maturation and is ~90% completed in 2-cell embryos, although translation of maternal mRNA continues into the 8-cell stage. Late 1-cell embryos are transcriptionally competent. Transcription of endogenous genes also has been detected in late 1-cell mouse embryos where it begins at the end of S-phase. However, transcription-dependent protein synthesis does not begin until 2 to 4 hours after completion of the first mitosis and the beginning of S-phase in 2-cell embryos. Eight to 10 hours later during G2-phase of 2-cell embryos,expression of zygotic genes increases in both amount and complexity. Thus, ZGA has at least three recognizable phases: transcription without translation begins in late 1-cell embryos (phase I), but transcription coupled to translation does not begin until the early 2-cell stage in development (phase II), and robust transcription coupled to translation does not begin until the late 2-cell stage (phase III). The second phase of ZGA is specific for a subset of zygotic genes.

In mice, ZGA is a time-dependent event referred to as the "zygotic clock" that is delayed for about 24 hours post-fertilization, and therefore begins after formation of a 2-cell embryo (Fig. 1). This clock allows ZGA to begin in S-phase arrested 1-cell embryos after they have advanced temporally to the "2-cell stage". Following fertilization, some proteins (e.g. transcription factor Sp1, TATA-box binding protein, RNA pol-II) are translocated from the cytoplasm to the nucleus. Moreover, the carboxyl-terminal domain (CTD) of the RNA pol-II catalytic subunit is hyperphosphorylated and transcriptionally inactive in mature eggs (RNA pol IIo). Fertilization triggers dephosphorylation of the CTD into a hypophosphorylated form IIa that is required for initiation of transcription and a reduced phosphorylated form IIe characteristic of somatic cells. Maternal mRNA degradation is triggered by meiotic maturation, and is about 90% completed in 2-cell embryos, although maternal protein synthesis continues into the 8-cell stage. Despite the fact that transcription is first detected in G2-phase 1-cell embryos, fertilized mouse eggs can delay expression of zygotic genes by uncoupling translation from transcription. An RNA polymerase II dependent gene can be transcribed prior to the first mitosis, but it is not translated until zygotic gene expression begins (up to 15 hours later). At this time, translation of RNA pol II transcripts becomes tightly linked to transcription (the second phase). Demethylation and remethylation also take place during embryogenesis (Fig. 2). The paternal genome is actively demethylated within the first 8 hours after fertilization, prior to DNA replication (Mayer et al., 2000; Oswald et al., 2000). In contrast, the maternal genome is passively demethylated by DNA replication in the absence of Dnmt-1 activity as cells undergo cleavage from the 2-cell to the morula and blastula stages. CpG methylation activity returns after implantation, and confers methylation patterns similar to what is observed in somatic cells. 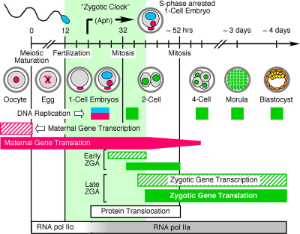 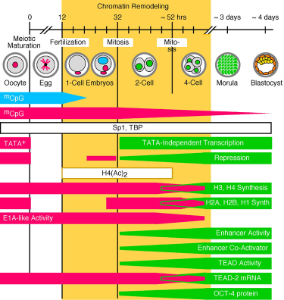 Figure 2. Developmental changes affecting regulation of gene expression at the beginning of mouse development. These include changes in DNA methylation of the paternal and maternal genomes, changes in histone synthesis and modification that lead to chromatin-mediated repression, and acquisition of chromatin-mediated repression, acquisition of enhancer function. Some transcription factors such as Sp1 and TBP are ubiquitous. TATA-box function appears to be restricted to differentiated cells. Color coding and bar coding is same as in figure 1.

One approach to understanding regulation of DNA replication and gene expression at the beginning of mammalian development has been to inject plasmid DNA into the nuclei of mouse oocytes and preimplantation embryos. The injected DNA can replicate or express an encoded reporter gene only when specific cis-acting regulatory sequences are present and provided with their cognate transacting proteins. Moreover, replication and transcription of DNA or translation of nascent mRNA occur only when the cellular genome executes the same function during its normal developmental program.

Using this approach, we made five important discoveries:

(2) Once ZGA begins, the requirements for transcription can differ from those observed at later stages in development. Prior to cell differentiation, enhancer stimulation is observed in the absence of TATA-box cell differentiation (Majumder & DePamphilis, 1994; Davis & Schultz, 2000). This would imply that the TATA-less promoters that drive transcription of typical housekeeping genes can be stimulated selectively in cleavage stage embryos, but not in differentiated cells (Figs. 2). In fact, we discovered that oocytes are unique in that they express an E1A-like activity that may serve to stimulate genes in place of enhancer activity (Dooley et al., 1989).

(3) Chromatin-mediated repression and the ability of embryo-responsive enhancers to stimulate DNA transcription or replication first appears at the 2-cell stage of mouse development (Fig. 2). One or more factors capable of repressing DNA transcription and replication are absent from 1-cell embryos; they are produced just prior to ZGA (Henery et al., 1995; Wiekowski et al., 1997). Thus, by delaying transcription and by preventing any transcripts that are made from being translated, the zygotic clock provides a window of opportunity for remodeling parental chromosomes in the absence of gene expression (Fig. 2). Repression exists in the maternal nucleus of oocytes and one-cell embryos, and the zygotic nuclei and cytoplasm of two- to eight-cell embryos, but not in the paternal pronucleus of one-cell embryos. The ability to repress all transcription appears only after formation of a two-cell embryo and correlates with changes in histone synthesis (onset of H1, H2A, H2B synthesis) and modification (H4 acetylation). Furthermore, although transcription always requires a functional eukaryotic promoter, the ability to use enhancers (sequences that can operate in either orientation and at a distance from the start site) to relieve chromatin-mediated repression also first appears with formation of a 2-cell embryo. This is the time when an enhancer specific co-activator, and sequence-specific enhancer activation proteins are first detected .

(4) The most powerful of these enhancers requires the sequence-specific DNA binding protein, Tead (Martinez-Salas et al., 1988; 1989; Mélin et al., 1993), and only one member of this novel family of transcription factors (Tead2) is produced in the embryo at the onset of zygotic gene expression and for the subsequent 7 days (Kaneko et al., 1997). Thus, Tead2 is one of the first transcription factors expressed during mammalian development. Tead proteins all bind to the same DNA site, with the same affinity, and stimulate transcription of specific genes and activate the polyomavirus origin of DNA replication from 20 to >500-fold (Kaneko & DePamphilis, 1998; DePamphilis, Kaneko & Vassilev, 2002). We recently discovered that Tead-dependent transcription in mouse fibroblasts is regulated by the availability of a powerful transcriptional co-activator, YAP65 (Fig. 3; Vassilev et al., 2001). Since both TEAD2 and YAP65 are found in all embryonic, neural, and hematopoietic stem cells (Ramalho-Santos et al.2002), Tead-dependent transcription appears to play a pivitol role in cell differentiation.

TEAD proteins are localized in the nucleus, but YAP is localized in the cytoplasm (Vassilev et al., 2001). When YAP is overexpressed in mouse fibroblasts, most of it forms a complex with 14-3-3 proteins, a family of proteins that binds a multitude of functionally diverse signaling proteins, and are involved in localizing proteins in the cytoplasm. 14-3-3 and TEAD proteins compete for the same binding site on YAP protein. A smaller fraction of YAP is associated with the multi-PDZ domain protein, MUPP1. PDZ domain proteins are involved in assembly of protein signaling complexes on membranes. Given the fact that YAP is the rate limiting factor for TEAD-dependent transcription, and the fact that YAP binds to the SRC/YES protein tyrosine kinase family via its SH3 binding domain, we suggest that TEAD-dependent transcription is regulated by the availability of YAP65, and the availability of YAP65 is regulated by the SRC/YES signal transduction pathway (Fig. 3). One way this might occur is if mitogenic signals are relayed via the SRC/YES family of proteins to release YAP from the plasma membrane and allow it to translocate into the nucleus where it activates TEAD-dependent transcription. Conversely, TEAD­dependent transcription can be terminated by releasing YAP to translocate back to the cytoplasm where it is sequestered by 14-3-3 proteins. The putative YAP/MUPP1 plasma membrane site could be reloaded from the YAP/14-3-3 pool. We are currently exploring the mechanisms that regulate activation of TEAD-dependent transcription, and identifying the genes activated by TEAD-2 at the beginning of mammalian development. 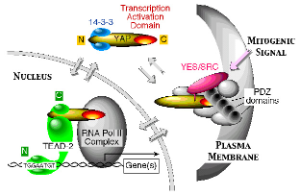 (5) While searching for Tead2 regulatory elements, we discovered a novel single copy gene called Soggy (Sgy) 3.8 kb upstream of the Tead2 mRNA start site and transcribed in the opposite direction (Kaneko and DePamphilis, 2000). The same locus exists in the human genome, except that the two mRNA start sites are separated by only 1.5 kb. Thus, regulatory elements of these two divergently transcribed genes lie in close proximity and therefore provide a unique paradigm for differential regulation of gene expression during mammalian development. Sgy and Tead2 are coordinately expressed in mouse preimplantation embryos and ES cells, but differentially expressed in differentiated cells (they express either Sgy or Tead2 but not both). In adult tissues, Sgy mRNA is detected at high levels only in the testes, where it is localized to developing spermatocytes, and at low levels only in lymphocytes. During embryogenesis, Sgy mRNA is first detected during the onset of zygotic gene expression at the 2-cell stage and continues until the blastocyst stage (Kaneko et al., 2004). With the onset of embryonic stem (ES) cell differentiation, Sgy is repressed until day 15 when it appears in the developing dorsal root ganglia and in the cartilage primordium of the nasal septum (Krupnik et al., 1999).

We have recently discovered that Soggy protein (SGY) localizes to the acrosome during spermatogenesis (Kohn, Kaneko and DePamphilis, submitted for publication). Thus, the highly restricted expression of Sgy in adult tissues, the similarity of SGY to Dickkopf proteins (secreted antagonists of Wnt proteins), and the localization of SGY to the acrosome all suggest that SGY plays a critical role in spermatogenesis and may be essential for fertilization.