In year 2000, we reported the first clear evidence that “origin replication complex” (ORC) activity in mammalian cells is regulated by cell cycle changes in the affinity of the Orc1 subunit for chromatin (1,2). subsequence reports from other labs as well as our own have since confirmed this concept and extended it to show that mammalian Orc1 is selectively ubiquitinated and phosphorylated during the S to M-phase transition, while ORC subunits 2 to 5, which comprise a stable core complex (3,4), remain tightly bound to chromatin throughout cell division (Fig. 4). 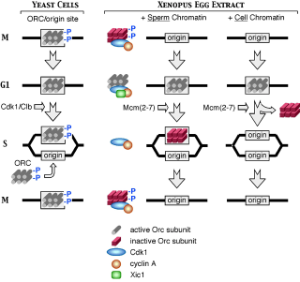 Figure 3. The ORC cycle in yeast cells and frog eggs. Yeast: ORC (six gray cylinders) remains bound to replication origins throughout the cell cycle, but ORC is phosphorylated (-P) during the S to M periods, and this phosphorylation inhibits its ability to assemble a pre-RC.
Xenopus laevis egg extract: ORC binds to sperm chromatin, but the affinity of ORC for chromatin is reduced (red boxes) following pre-RC assembly. ORC is phosphorylated by Cdk1/cyclin A during G2/M and released from chromatin. If somatic cell chromatin is incubated in the extract instead of sperm chromatin, then ORC is released spontaneously from chromatin following pre-RC assembly. Xic1, a Cdk specific inhibitor, is present prior to S-phase, and presumably inhibits the ORC associated Cdk1/cyclin A activity, thereby allowing ORC to bind to chromatin. Xic1 is degraded following pre-RC assembly. 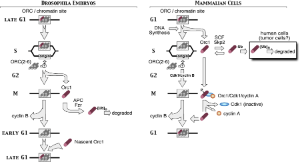 When is Orc1 bound tightly to chromatin In mammalian cells? Hamster cells contain specific DNA replication origins between the DHFR and 2BE2121 genes (Fig. 2A). The ability of cells to initiate replication preferentially at these sites by incubating nuclei in a Xenopus egg extract first appears during early G1-phase of the hamster cell division cycle (5) . Pior to this “origin decision point”, it initiation of DNA replication under these conditions occurs randomly along the genome. We found that the random initiation events were due to initiation events carried out by Xenopus ORC proteins present in the extract and that site-specific initiation events were carried out by hamster ORC proteins that had initiated pre-RC assembly in vivo before the nuclei had been isolated (2). Thus, hamster ORC activity was absent during mitosis and early G1 phase, and reappeared as cells progressed through G1 phase.

Surprisingly, hamster Orc1 and Orc2 proteins were present in nuclei at equivalent concentrations throughout the cell cycle. However, only Orc2 was stably bound to chromatin. Orc1 and Mcm3 were easily eluted from chromatin during mitosis and early G1 phase, but became stably bound during mid-G1 phase, concomitant with the appearance of the origin decision point (i.e. assembly of a functional pre-replication complex at ori -b). Therefore, we concluded that the affinity of Orc1 for ORC/chromatin sites is cell cycle dependent. The net result is that the assembly of pre-RCs at specific sites is delayed until mitosis is completed and a nuclear membrane is assembled (1).

When does Orc1 disengage from ORC/chromatin sites? We discovered that Orc1 could be selectively eluted from chromatin as hamster cells entered S-phase (6) , and a similar observation was reported for human cells (7). Furthermore, we observed that some of the CgOrc1 that was released from chromatin during S-phase was mono-ubiquitinated. During the M to G1 transition, Ub-Orc1 was essentially absent and non-ubiquitinated Orc1 rebound to chromatin. Polyubiquitination and degradation of Orc1 was only observed in vitro under conditions that permeabilized nuclei. In contrast, Orc2 remained tightly bound to chromatin throughout the cell cycle and was not a substrate for ubiquitination either in vivo or in vitro. Since the concentration of Orc1 remained constant throughout the cell cycle, and its half-life in vivo is the same as that of Orc2, we concluded that mono- ubiquitination of non-chromatin bound Orc1 presumably facilitates inactivation of ORC by sequestering Orc1 during S-phase rather than by selectively degrading Orc1 . In contrast, studies in human cells revealed that Orc1 was selectively polyubiquitinated and degraded during S--phase (8,9) . Thus, ORC activity in mammalian cells is regulated during each cell cycle through selective inactivation of the Orc1 subunit.

What prevents non-ubiquitinated Orc1 from rebinding to ORC/chromatin sites during mitosis? We discovered that Orc1 is selectively associated with Cdk1(Cdc2)/cyclin A during the G2/M-phase of the hamster cell cycle (10) . This association accounted for the appearance in M-phase cells of hyperphosphorylated Orc1 that was subsequently dephosphorylated during the M to G1 transition. Rebinding of either hamster or human (8) Orc1 to chromatin follows the same time course as degradation of cyclin B, suggesting that exiting mitosis triggers Orc1 binding to chromatin. In fact, inhibition of Cdk activity in M-phase cells resulted in rapid binding of Orc1 to chromatin. We conclude that the same cyclin-dependent protein kinase that initiates mitosis in mammalian cells concomitantly inhibits assembly of functional ORC-chromatin sites. Presumably the same mechanism exists in human cells where Cdk1/cyclin A prevents any residual or nascent Orc1 from prematurely binding to chromatin.

What triggers the release of Orc1? To address this question, we isolated chromatin from metaphase hamster cells and incubated it in Xenopus egg extract to initiate DNA replication (11). Since hamster metaphase chromatin, like sperm chromatin, lacked ORC activity of its own, DNA replication was dependent on XlORC in the egg extract. We found that Xenopus laevis ORC rapidly bound to hamster somatic chromatin in a Cdc6 dependent manner, and was then released spontaneously into the reaction mixture, concomitant with initiation of DNA replication. Once pre-RCs were assembled either in vitro or in vivo, further binding of XlORC was inhibited. Neither binding nor release of XlORC was affected by inhibitors of either cyclin-dependent protein kinase activity or DNA synthesis. In contrast, inhibition of pre-RC assembly, either by addition of geminin or by depletion of XlMcm proteins, augmented ORC binding by inhibiting ORC release. These results demonstrated a programmed release of the entire XlORC from somatic cell chromatin following pre-RC assembly. Analogous results were observed using Xenopus sperm chromatin as the substrate, except that when sperm chromatin replicates in a Xenopus egg extract, the affinity of XlORC for chromatin becomes salt-labile following pre-RC assembly (11,12) and then appears to be released during G2/M-phase as a result of hyperphosphorylation by Cdk1/cyclin A (13). Thus, the affinity of XlORC for chromatin depends on at least three factors: pre-RC assembly, chromatin structure, and the action of Cdk1/cyclin A (Fig. 3). The activity of Cdk1/cyclin A that is associated with XlORC may be regulated by Xic1, a member of the p21(Cip1)/p27(Kip1) family of Cdk--specific inhibitors. Xic1 appears during the M to G1 transition and is degraded during S-phase (14).

Does the "ORC cycle" exist in other eukaryotes? Various manifestations of this "ORC cycle" have since been discovered in yeast, frogs, and flies . ORC subunits in yeast (both S. cerevisiae and S. pombe) undergo cell cycle dependent phosphorylation that contributes to preventing reinitiation of DNA replication before cell division is finished (17-19). Orc2 and Orc6 are phosphorylated by Cdk1(Cdc28)/cyclin B during the S to M transition, and then dephosphorylated during early G1-phase when pre-RC assembly occurs. In S. pombe, Cdk1(Cdc2)/cyclin B associates with replication origins during S-phase and remains there during G2 and early M-phases. In Xenopus eggs, the entire ORC complex becomes disengaged from chromatin during S-phase, phosphorylated during G2/M and then rebound stably to chromatin during the subsequent G1-phase. In Drosophila embryos, Orc1 is selectively ubiquitinated by the APC/Fzr system during mitosis, degraded as cells exit mitosis, and then resynthesized and bound to chromatin during late G1-phase (16). Thus, there is a universal control point in eukaryotic cell division cycles: the same cyclin dependent protein kinase that regulates the onset of mitosis (Cdk1), also prevents premature assembly of functional ORC/chromatin sites until mitosis is complete and a nuclear membrane is present.