How common is stillbirth?

Stillbirths in the United States

In 2006, the most recent year for which U.S. data are available, 1 out of every 167 pregnancies that made it to the 20th week ended with the death of the fetus before birth (that is, stillbirth before delivery). This translates to a total of nearly 26,000 deaths. About one-half of these stillbirths took place at 28 weeks of pregnancy or later.1 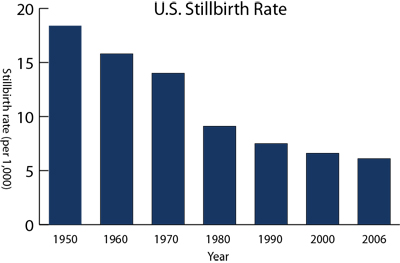 In the United States, there are similar numbers of stillbirth deaths and deaths of infants during their first year of life.1,2 That is, about one-half of all deaths between 20 weeks of pregnancy and the first birthday occur before delivery.

On average, the U.S. stillbirth rate has been going down. For example, in 1985, almost 1 of every 127 pregnancies that made it to week 20 ended as a stillbirth before delivery;1 in 1950, the rate was about 1 of every 53 such pregnancies.3

Using the World Health Organization definition for stillbirth, which counts stillbirths only from 28 weeks of pregnancy, there were 2,600,000 stillbirths around the world in 2009, the most recent year for which worldwide data on stillbirth are available. This translates to an average of about one stillbirth at or after 28 weeks for every 45 births in 2009.4

The stillbirth rate is highest in South Asia and Sub-Saharan Africa (about 1 stillbirth at the 28th week of pregnancy or later per 33 births). The rate is lowest in high-income countries—fewer than 1 per 250 births.4

Science Update: NIH-funded study in mice suggests bacteria rely on metal tolerance to cause pregnancy-related infection
Director's Corner: Reflecting on the Past and Looking to the Future
Spotlight: Scientific advances from the Division of Intramural Research
END_OF_DOCUMENT_TOKEN_TO_BE_REPLACED
Content OwnerOffice of CommunicationsLast Reviewed Date10/25/2022